Even historical buildings need a modern and expertly advised Fire Alarm & Detection System. Earlier this year, Cadw, the Welsh Government’s Historic Environment Service reached out to us to take care of a systems upgrade at Caerphilly Castle, Castell Coch and Chepstow Castle. In Partnership with Holloway Partnership and Kier Specialist Services, we were given the task to supply and install a new Kentec EMS radio-controlled analogue addressable system to BS 5839-2017 EN54 part 25 Compatible to a Category L3 Standard.

When installing any new equipment to heritage buildings it is imperative to get the aesthetics correct first time with the approval of the consultants, there can be no mistakes as the Buildings are protected with no room for error.

Through detailed and thorough radio signal survey with manufacturers EMS we were able to overcome signalling issues where walls in places are over 2 meters thick that presented issues that had to be overcome with additional signal boosters. In one of the Castles, we could not overcome the loss of signal and had to hardwire surface cable in Black PH30 cabling.

Following these surveys and detailed drawings, we were able to agree on final locations of devices in compliance with BS5839 and also sympathetic with the constraints of a heritage building.

This medieval fortification was built in the 13th century by Gilbert de Clare as part of his campaign to conquer Glamorgan. Surrounded by impressive lakes the Castle occupies around 30 acres and is the second-largest Castle in Britain, the first being HRH Queen Elizabeth’s place of residence, Windsor Castle.

The existing Radio-controlled system and fire alarm panel was utilised to provide a new loop to the outer main gate towers. In addition to supplying automatic detection to the towers, FireRite also installed power and lighting to the towers ground-floor storerooms. In order to access these stores with wiring, specialist holes were drilled through 2-metre-thick walls. It was precisely the thickness of these walls that prevented any radio signals from being received and why FireRite installed 9 hard-wired analogue devices.

A new Fire Alarm panel and Radio-Hub was installed in the main entrance of the great hall along with 43 additional components. The system in the great hall is linked to the visitor centre via aerial transmitters and receivers providing an indication to visitors centre providing a site-wide activation of fire alarm

This project was a team effort! During the installation, specialist contractors were assembled in order to assist in the completion of this project, all of which were sourced and managed by Fire-Rite including;

Castell Coch (Red Castle) is a 19th Century Gothic revival. The first castle dates back to the Normans after 1081 with the purpose of protecting the newly conquered town of Cardiff and control the route along the Taff Gorge. The castle became the basis for a new Fortification for Gilbert de Clare in 1267 and 1277 to protect his freshly annexed Welsh Lands. In 1760 the castle ruins were acquired by John Stuart, 3rd Earl of Bute, as part of a marriage settlement.

For FireRite, this was certainly the largest of the three installs with 71 devices over 2 loops installed throughout. There were some significant complexities involved in acquiring strong radio signals. In keeping with the monuments aesthetics, given its status as a protected site, a number of signal tests were required. In turn, this let us know that the placements of the Radio Control Communicators (RCC’s) would not only provide clear communications back to the Radio Hub and Fire Alarm Panel but would also not stand out and tarnish the beauty of the castle.

The new Fire Alarm Panel and Radio-Hub was discreetly installed in the ticket office inside the courtyard of the castle. What is more, we installed a further 2 Aerial Receivers externally to both sides of the ticket office to ensure improved communication.

Wales oldest surviving post-Roman stone fortification, construction of Chepstow Castle began in 1067 by Norman Lord William Fitzosbern. Originally known as Striguil, it was the southernmost of a chain of castles built in the Welsh Marches.

The specification for this particular install was the most straightforward of all three castles. The original radio-controlled Fire Alarm System was to be replaced like for like with the new, more robust and manageable Fire Alarm System. The exception being the location of the original panel being replaced with one of our five Radio Control Communicators (RCC’s).

All in all, we installed 36 devices throughout the castle that all communicated back to the central Fire Alarm Panel located at the main entrance ticket office. 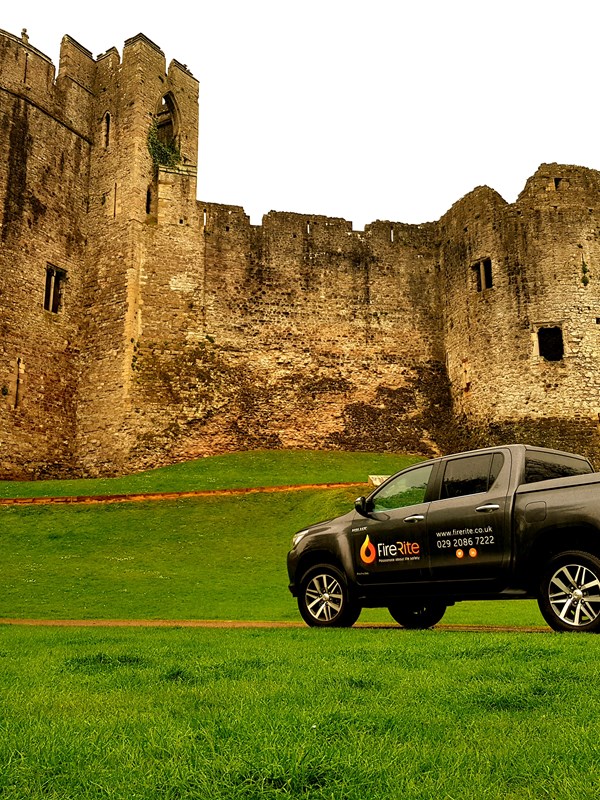